Skip to content
OPPORTUNITIES OTHERS
Adhyayan Foundation for Policy & Research cordially invites you to a Webinar on “Ushering Modern India through Public Infrastructure” by our Keynote speaker Hon’ble Minister Dr. General V.K. Singh on 23rd January, 2021 at 11 AM.

Hon’ble Dr. Gen. V.K. Singh is currently serving as the MoS Ministry of Road Transport and Highways, Government of India. He’s a former four-star General of the Indian Army and has served as the 24th Chief of Army Staff of India. His valiant and strategic roles in 1971 India-Pakistan War and Operation Pawan is widely appreciated. He has previously served as Minister of State for External Affairs and also as Minister of State (Independent Charge) for Development of the North Eastern Region, and as a minister he has played an active role in several rescue operations like operation Rahat for the evacuation missions in Yemen and Djibouti. AFPR welcomes his gracious presence in this webinar to discuss upon the issues of Modernizing existing plans and policies for the country pertaining to Public Infrastructure and development on: 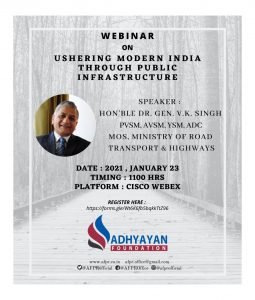